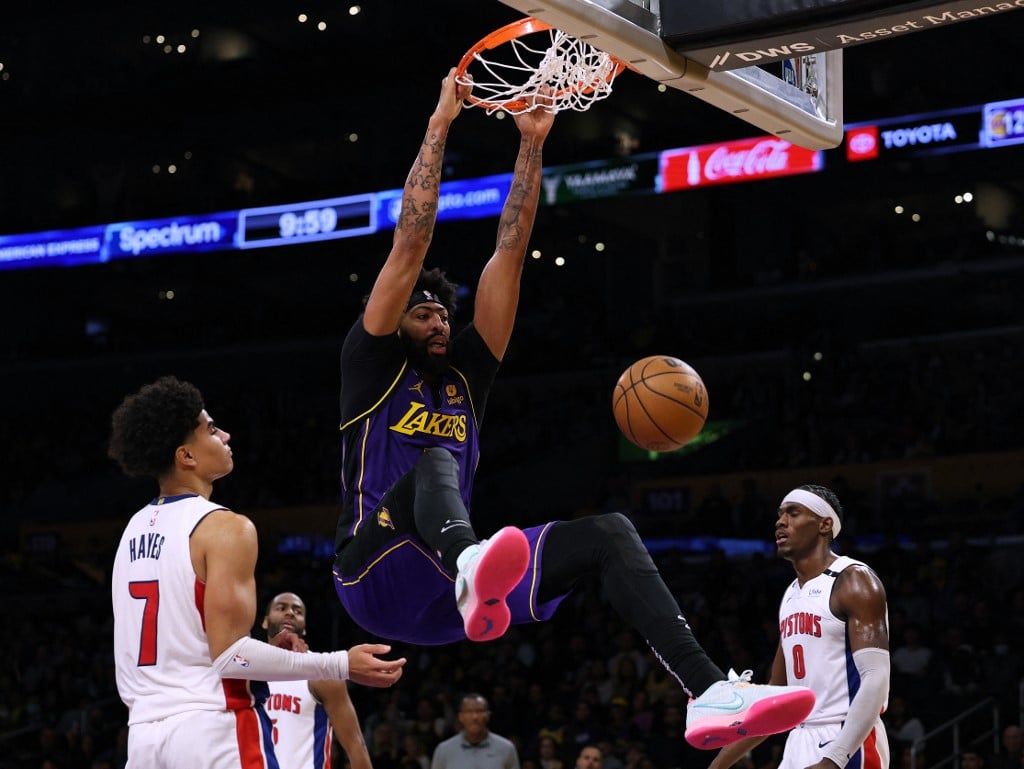 Anthony Davis #3 of the Los Angeles Lakers dunks between Killian Hayes #7 and Jalen Duren #0 of the Detroit Pistons during a 128-121 Lakers win at Crypto.com Arena on November 18, 2022 in Los Angeles, California. NOTE TO USER: User expressly acknowledges and agrees that by downloading and/or using this Photograph, user is consenting to the terms and conditions of the Getty Images License Agreement. Mandatory Copyright Notice: Copyright 2022 NBAE. Harry How/Getty Images/AFP (Photo by Harry How / GETTY IMAGES NORTH AMERICA / Getty Images via AFP)

Anthony Davis amassed 38 points, 16 rebounds and four blocked shots and Lonnie Walker IV added 17 points as the Los Angeles Lakers took advantage of a four-day break in the schedule and earned a 128-121 victory over the visiting Detroit Pistons on Friday.

Austin Reaves scored 16 points and Wenyen Gabriel added 15 as the Lakers went 35 of 40 from the free-throw line and won consecutive games after coming out on top Sunday against the Brooklyn Nets.

It was just the fourth victory of the season for Los Angeles, which has two five-game losing streaks. Lakers star LeBron James, who had been considered questionable due to a groin injury, sat out his third consecutive game.

🔥 @AntDavis23 dominated in the @Lakers victory, putting up a season-high 38 PTS!

Alec Burks had 23 points and Bojan Bogdanovic added 20 as the Pistons lost a season-high sixth consecutive game. Killian Hayes had 18 points and nine assists for Detroit, while Jaden Ivey had 17 points but went 1 of 9 from 3-point range.

The Pistons, who dropped a 96-91 decision against the Clippers on Thursday, are 0-2 to start a six-game Western Conference road trip.

The Lakers led 104-102 with 7:52 remaining when the Pistons’ Saddiq Bey departed with a right ankle injury. Los Angeles then went on a 14-6 run to take a 118-108 advantage with 4:07 remaining for their largest lead of the game to that point.

In a back-and-forth first half, the Pistons were the first to establish themselves with a 17-4 run in the first quarter to take a 31-23 lead, and they were up 37-30 at the end of the period.

The Lakers forged a 20-5 run in the second quarter for a 57-56 lead. A pair of baskets from Davis put the Lakers on top, including his first field goal of the game with 3:43 remaining before the half. The Lakers led 68-64 at the break.

Russell Westbrook had 10 points and 12 assists for Los Angeles.

Thomas Bryant (eight points) and Dennis Schroder (two points) each made their season debut for the Lakers after both underwent thumb surgeries last month.