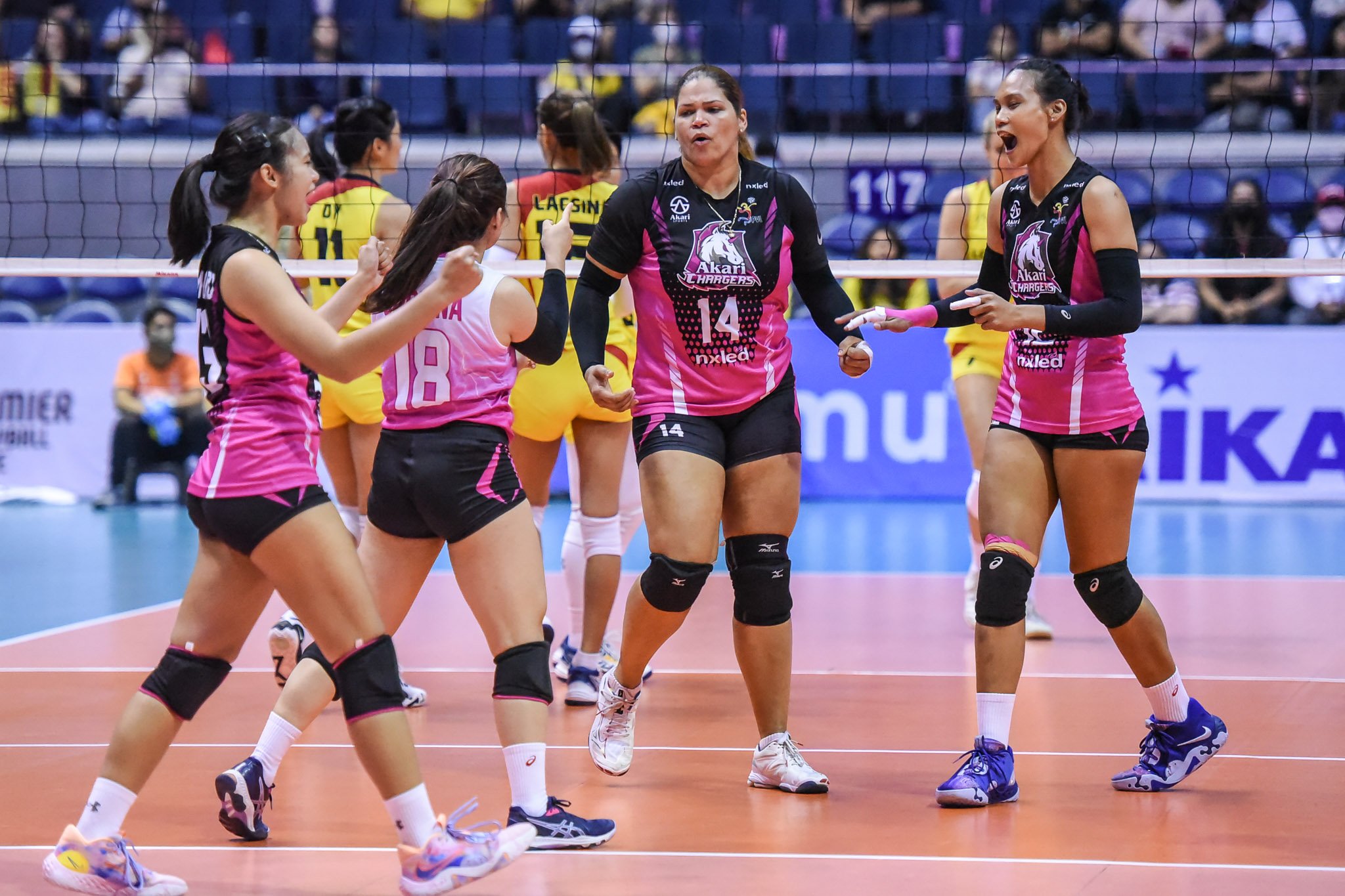 Rivera drilled 29 kills and three blocks, including the big hits in the fourth set that capped their victory, preventing the Cargo Movers from moving closer to a semis berth.

The three-time Olympian scored four of her five spike attempts to give Akari a 23-20 lead in the fourth. But Lindsay Stalzer’s drop ball and an attack error from Rivera trimmed the advantage down to one, 23-22.

Rivera stopped the bleeding from the back row to reach match point, 24-22, followed by Stalzer’s attack as the ball went out.

“She’s not happy because we didn’t get the (wins) in the beginning, to be on the top four. But of course, she’s happy because she had a chance to come here and play,” said Rivera in Spanish as translated by Akari coach Jorge Souza de Brito. “She’s almost 38 so she’s so proud to still play at this level.”

Setter Jaja Maraguinot made 19 excellent sets on top of four points from two aces, while libero Rachel Jorvina protected the floor with 21 digs and 12 excellent receptions as Akari finished the tournament with a 3-5 record.

“Of course, it’s always a good win and I’m happy about that. It’s always a challenge being the youngest one but we’re heading into this tournament with a lot of chances,” said De Brito after ending his first PVL season. “Finally, maybe we got the spirits up of this team so for the future, we’re gonna be again starting from the beginning so I think we will be much better.”

F2 Logistics dropped to 3-3 tied with Choco Mucho and Cignal in fourth place with two more semis spots remaining. Creamline (6-1) and Chery Tiggo (5-2) gained the first two tickets, while No.3 seed Petro Gazz (4-2) is just a win away from getting the third berth.

Stalzer and Ivy Lacsina led the Cargo Movers with 17 points each as Mau was in street clothes due to a calf issue. Kianna Dy had 11 points, while Shola Alvarez filled in for Mau with six points and 11 digs.

Dawn Macandili had 24 digs and 16 receptions in a losing effort. F2 Logistics needs to win its last two games against Cignal on Saturday before wrapping up its elimination round against Petro Gazz on Tuesday next week.