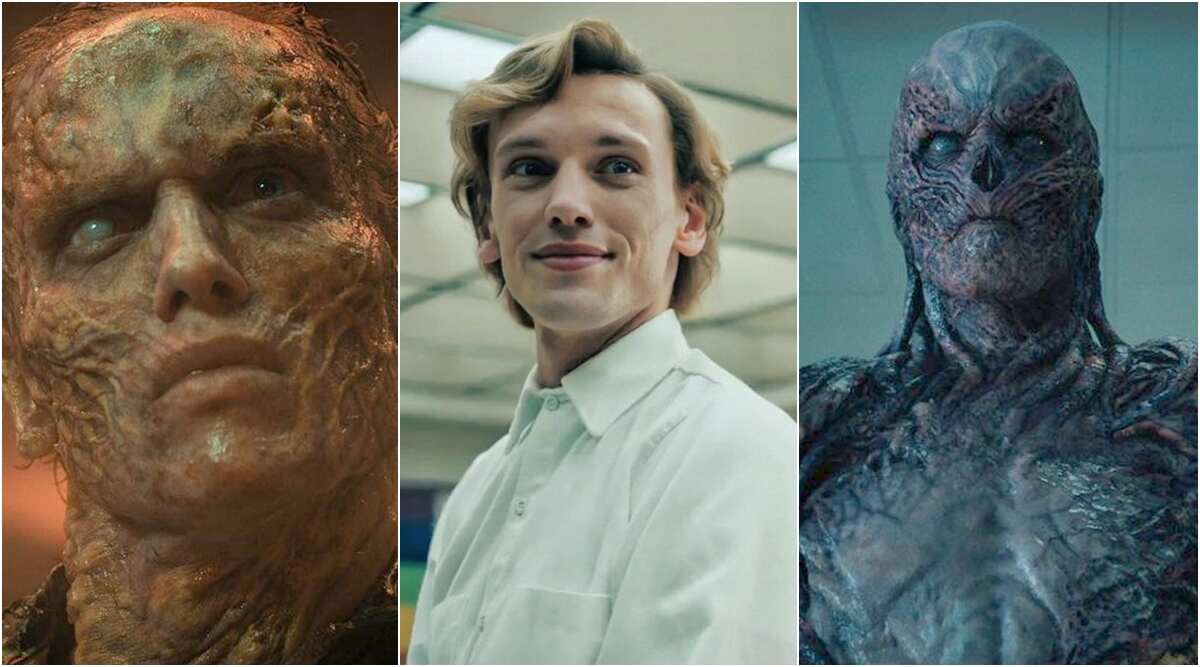 Stranger Things season 4 was the grandest of all the seasons of this Netflix flagship. Whether it was the scale, locations, the VFX, or the budget, everything was a massive version of itself. This season also saw many additions to the cast. From Hoppers Russian accomplices to the psychotic jocks of Hawkins High, every recruit elevated the storylines. Also, who can forget Chrissy and Eddie without tearing up? But the greatest addition to the show was Jamie Campbell Bower. Portraying Henry/Vecna/001, we really couldn’t ask for a more terrifying villain. But this villain seems to be feeling sorry for himself. Why?

In his recent appearance on The Tonight Show Starring Jimmy Fallon, Jamie Campbell Bower shared his struggles with playing Vecna. And, no, it’s not the serial killings of innocent teenagers that bothers him. When asked how much of Vecna’s look in Stranger Things is CGI, Bower informed that “It’s about 90 percent real.” I’m sure he’s referring to his nerve-chilling voice as well.

Jamie further added, “It takes about eight hours to put the whole thing on.” Unsurprisingly, this statement received a sympathetic roar from the audience, who felt Bower’s pain. Bower graciously acknowledged the host and the studio audience, saying, “Thank you, I appreciate that. I feel sorry for me, too.”

Talking more about the process, he said, “We start at like 3:00 A.M. in the morning to be ready for about 10:00, and then I have to act.” He even informed us it takes about 90 minutes to de-Vecna-fy himself. But he pulled it off, and how! And with barely any CGI. All the while also playing the kind-hearted orderly who helps Eleven, only to be later revealed as 001, Henry, and Vecna.

ALSO READ: Is Henry Creel or Vecna Redeemable? Even The Duffers Don’t Know

Playing a villain is often much more challenging than the classic good guys. There are so many layers and nuances pertaining to the attributes and the driving force that the actor needs to keep in mind. Imagine doing all that while adorning the literal weight of the character. We are talking kilograms of prosthetics and makeup. And fans love him for it, maybe a little too much.

Netflix even uploaded a video breaking down the entire process of Bower becoming Vecna. The actor even gave a shout-out to the prosthetic artist Barry Gower, who’s “amazing, who works on Game of Thrones and The Witcher.” Jamie even mentioned the other creatives like Duncan Jarman, Mike McCash, Nicks, and Eric Garcia, who were imperative to his Vecna aesthetics.

ALSO READ: Lich-King And Evil god Vecna May Have Threatened The Brothers Too to Build His Story The Way we See It in Stranger Things.

Hearing about his struggles and looking at the entire making-of reel, one can only be in awe of the immensely talented Jamie Campbell Bower. Major props to him and the entire creative team for bringing Vecna to life. What do you think of his transformation? We, for one, couldn’t ask for more. This definitely calls for a re-watching of Stranger Things 4.

The post “I feel sorry for me”: Jamie Campbell Bower Opens Up About the Horrors of Playing Vecna, and None of It Is Guilt for the Killings appeared first on Netflix Junkie.

Exclusive: Neil Patrick Harris Stole the Most Unbelievable and Unforgettable Thing From ‘How I Met Your Mother’ Set – TalkOfNews.com Millie Bobby Brown has never shied away from proclaiming her love for mainstream pop songs. Quite recently, she shared a hilarious clip of her dancing to Cardi B’s viral ‘Up’ on the set of Stranger Things season 4. Dressed in Eleven’s garbs, it was hilarious to see the ever-serious Eleven, who couldn’t form a single sentence a few seasons ago, shaking her bum to the provocative ‘Up’. This reminded us of the time she and Harry Styles hung out at an Ariana Grande concert. The Brits surely had a great time not noticing the fans going crazy at the sheer magnitude of their favorite stars interacting!

In 2019 Stranger Things fans, Harry Styles fans, and Ariana Grande fans saw their world colliding as Millie Bobby Brown and Harry were seen interacting at Grande’s concert. The American pop star had just kicked off the European leg of her Sweetener tour at the London 02 arena, and it saw the presence of mega stars like Harry and Millie on the first day.

The two British stars chatted, and Harry even broke out some moves to Ariana’s ‘Dangerous Woman’. Harry was seen wearing an all-white ensemble piece and looking very chic. On the other hand, Brown paired an embellished jacket with a white top and black striped pants.

The now 18-year-old didn’t just attain fame with her starring role in Stranger Things, but it also helped her befriend some top celebs. She has a very good bond with Drake.

ALSO READ: Here’s Why Millie Bobby Brown Did Not Cut Her Hair For ‘Stranger Things’ Season 4

The Stranger Things star is trending for her hike in salary

Brown, at 18, has already earned herself a position in the list of top highest paid actors under 20. She quite recently bagged a paycheck of $10M for Enola Holmes 2. On the other hand, Harry continues juggling a career in music and acting. He entered the MCU as Eros and also already bagged a Toronto International Film Festival’s 2022 TIFF Tribute Award for his role in My Policeman.

The post When Millie Bobby Brown and Harry Styles Synced Their Moves to Ariana Grande’s Concert in London appeared first on Netflix Junkie.

New anime has arrived! You won’t want to miss a single episode of Spriggan, the hottest new anime on the market. This series not only has spectacular sci-fi fights. But it also some of the finest literary themes we all know and love, such as good vs. evil, past vs. present, past vs. future, and, our personal favorite, supernatural power vs. human capability.

Furthermore, at the forefront of this new title are a number of well-written characters, each with their own set of objectives, motivations, and limitations. Let us take a look if Spriggan is the next anime you should binge-watch or not.

Spriggan is based on Ryji Minagawa and Hiroshi Takashige’s classic comic. The classic action manga is revived for the small screen after 30 years, and Spriggan, the blockbuster comic with ten million copies produced, is now another fantastic addition to Netflix’s repertoire.

There is an old relic in the realm of Spriggan that has the ability to affect the world forever. Depending on who discovers the item, society can either become everyone’s worst nightmare or remain the calm world that it is. As a result, it’s up to ARCAM, the organization entrusted with safeguarding this power, to rescue the day.

ALSO READ: What Do Anime Fans Want From the New’ Death Note’ Netflix Adaptation by Duffer Brothers and Do They Really Want One?

However, with opposing viewpoints and adversaries at every turn, it is evident that mankind must work quickly if it is to live to see another day.

Why should you watch the show?

Spriggan, with only six episodes, might have easily seemed hurried or too short, yet the program manages to get a lot of mileage out of its formula. Each episode is lengthier than a regular TV episode and provides a single tale focusing on a specific relic or myth associated with civilizations all over the world.

Legends from throughout history are re-contextualized as superior technology from those who came before or as what looks to be pure magic. As a result, this series has no long-form plot in mind, and its sole goal is to deliver a collection of full stories that have more breathing room than they could in a TV anime.

The anime is currently streaming on Netflix, with no official news about its renewal for a second season. Nevertheless, if you are looking for action and fast-paced anime, then Spriggan is the perfect choice for you.

Will you watch the anime? Let us know in the comments.

The post Netflix’s ‘Spriggan’ Gives Retro Action Vibes but Is It Worth a Watch appeared first on Netflix Junkie.

Exclusive: What Is the Comedy Anime ‘Uncle From Another World’ on Netflix About? – TalkOfNews.com

For years, the Isekai genre has been a staple of anime, but Netflix’s new series Uncle from Another World turns the genre on its head. This beautifully crafted anime is a must-watch for all anime fans and is sure to leave you in splits as soon as you start watching it. However, the plot of the anime seems to be a little mysterious, with the title not giving much clue as to what to expect from the show.

But don’t worry. We are here to guide you through this incredible anime that must be on your watch list this August.

What is Uncle From Another World about?

Isekai translates as another or other world for the uninformed. Protagonists in this genre are frequently transported, summoned, or resurrected into a fantasy realm replete with swords and sorcery. Whatever way the characters arrive in this strange realm, they are swiftly lured into tales of adventure, peril, intrigue, and other high fantasy themes. What if the protagonist returns to their previous life? asks Uncle from Another World. What is the answer? Hilarity

Yosuke Shibazaki is the lead of the show. After waking up from a 17-year coma, he finds himself in Japan in 2017. Technology and culture have evolved to the point that the modern world is as alien to him as the magical world he abandoned. Takafumi Takaoka, Yosuke’s nephew, initially arrives to educate his newly awakened uncle of the harsh realities of contemporary life, only to learn that his uncle’s mad rants about his isekai exploits were all genuine.

ALSO READ: Netflix’s ‘Spriggan’ Gives Retro Action Vibes but Is It Worth a Watch

Takaoka, Shibazaki’s nephew, plays the straight guy and reacts flawlessly to his uncle’s ignorance and trials. The gags come at you hard and quick, which is typical of manzai humor. The visual jokes, misunderstandings, and everyday applications of the magical talents of Uncle from Another World will have you in stitches.

Is the show currently streaming on Netflix?

Hotondoshindeiru is the writer and illustrator of the series, which Kadokawa Shoten publishes. The Netflix series is now simulcasting in Asia, with a two-week delay in the global distribution. The first five episodes of Uncle from Another World are currently streaming and are classified TV-MA.

Will you guys watch the new anime? Let us know in the comments.

The post What Is the Comedy Anime ‘Uncle From Another World’ on Netflix About? appeared first on Netflix Junkie.