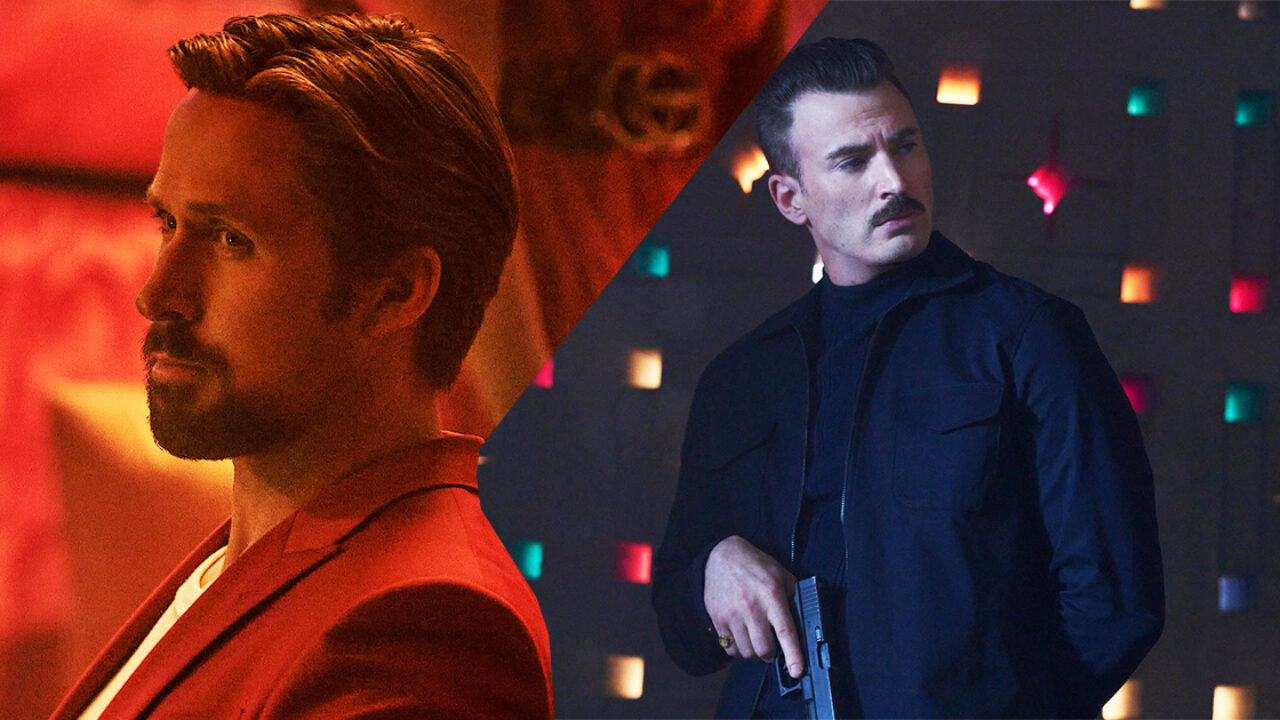 The Russo brothers sure know how to tease fans. Ever since they revealed they were reuniting with Chris Evans for another movie outside of the Marvel universe, fans were extremely excited. Not only that, but The Gray Man is also a comeback for Ryan Gosling. In the recently released teaser, we get another look into the action that is to go down between Evans and Gosling, and it looks really outstanding. And we’re really digging Ryan’s quick insults at Evan’s “trash stache”! But there’s one scene where Gosling wants to know Evan’s shoe size. Let’s find out why.

Gosling is missing a shoe in the teaser, and Chris Evans is hard to miss with his white pants

Gosling’s Court takes one assassin after another in the teaser, all while missing a shoe. Evans’ Llyod surprises him with a punch and what we think is a pepper spray. Gosling is immobilized temporarily, but he still spits insults at Evan’s choice of pants and mustache. But he still has a few tricks left and he drops a bomb. When Chris Evans chases him again, Gosling asks him his shoe size, hoping that his shoe would fit him. Ana de Armas also makes an appearance at the end, only to shoot Evans in his a**.

Evans’ turn as a villain is something to look forward to after his superhero world-saving Captain America stint in the Marvel movies.

ALSO READ: What Connects Lloyd Hansen and Tony Stark Except Great Facial Hair? FIND Out How Chris Evans Calls Back to His MCU Roots

A new action-packed spy franchise from the Russo brothers

The Gray Man is based on Mark Greaney’s novel of the same name. It follows a skilled CIA agent, Courtland Gentry (Gosling) who uncovers a dark agency secret. He goes on the run when the CIA dispatches Evan’s unhinged Lloyd Hansen and his team to finish him. The Russo brothers who have previously worked on the Avengers movies plan to turn it into a franchise. The film will release in limited theaters on July 15 before landing on Netflix on July 22.

ALSO READ: “But do they smell like Chris Evans?”: Russo Brothers Ask Netflix Selling Lloyd’s Trash Stache Ahead of ‘The Gray Man’ Release

Exclusive: 5 Ways to Calm Yourself Till Stranger Things Season 4 Drops on Netflix Exclusive: Laura Linney Says “It was all about survival” in a Heartfelt Farewell to the Netflix Classic, Ozark – TalkOfNews.com The saddest time in any binge watcher’s life comes when their favorite shows come to an end. You sit there looking at the black screen, wondering what to do? Well, we have something for you. One of the most loved shows, Ozark, meets its final season. And we have Laura Linney’s words for you.

Has it happened to you that sometimes when you look back at a show, you realize that this was the person who’s been leading the show? And that thought didn’t arise in your mind until now, right? Yes, we are talking about Ozark, and it is one of the most influential characters, Wendy Byrde. Laura Linney has played the role so well that we cannot imagine anyone else doing it better.

It is true that Marty brought the family to the Lake of Ozarks and he tried to save them from the troubles. But it was actually Wendy who was ready to do anything it takes to survive. Wendy went through some major happening events like violence, betrayal, and near-death experiences. Well, these remarkable qualities have made Wendy Ozark’s ruthless character, and Linney the most persuasive actor.

As the story grew, Linney understood the character so deeply that she could foresee Wendy’s next move; even though she didn’t have a clue about the story. Julia Garner has done the same kind of transformation of the character with her unique technique. Laura, about her character, says that Wendy was very impulsive and that gave her huge flexibility and an idea in which she should behave. She adds that whatever she did wasn’t wrong because “the template was set to hold the logic of whatever happened.” And this part of Wendy’s personality added more to the further season given her past crossed the paths with the narrative. These events from her past serve as emotional landmines, setting off a chain of explosive interactions.

Laura says that in the final season, she was a little concerned about the intensity of the character. She says that she wanted to maintain the balance which would make the character tangible. “… threading the needle with certain qualities of hers and not tipping too far in one direction or the other,” she explains. Linney further exclaims that she knew very well about this balance and she is hoping that she didn’t overplay or underplayed something.

Laura talks about her experience with the cast and the overall environment of the set. She says that the producer and Jason Bateman wanted her to direct an episode since the beginning of the show. But until the final season, Laura shot an episode and gave her directional debut. Bateman highly praised her directional debut. Although, Laura admitted she was threatened to direct an episode, but she is happy that she did it. It was wild for her to go outside of her comfort zone. But she says that it was a wonderful situation as there were so many people around her, ready to help her.

Finally, Laura admits she would not say no to another opportunity in the directional department. However, Laura says that she is and will be an actor first. She bids goodbye to the show and the character with this statement: “It feels strange. I’m just watching her float away.”

Share your favorite Laura Linney scenes and/or dialogues with us.

The post Laura Linney Says “It was all about survival” in a Heartfelt Farewell to the Netflix Classic, Ozark appeared first on Netflix Junkie.