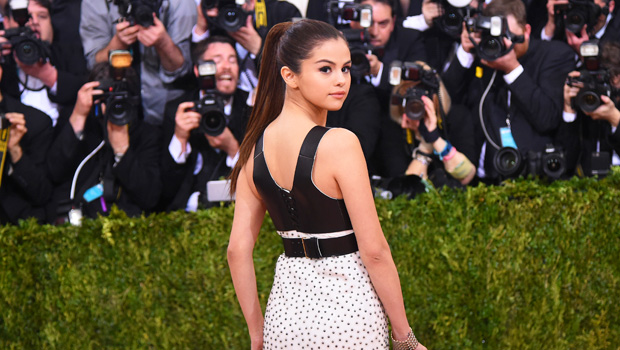 Selena Gomez looked gorgeous as she attended Britney Spears and Sam Asghari‘s wedding on June 9. The Disney alum, 29, was amongst the 60 guests at the intimate ceremony. She looked absolutely gorgeous, wearing a black, off-the-shoulder gown with a thigh-high leg slit, which you can see here. Selena completed her look with her hair parted in the middle and styled in curls. She was also seen carrying a bouquet of flowers as she headed to the ceremony.

Britney and Sam’s nuptials come nine months after the fitness model, 28, popped the question in Sept. 2021 and five years together. While the Crossroads actress has teased the wedding via Instagram — including potential locations, as well as revealing that friend Donatella Versace designed her dress — it was only reported on June 8 that the wedding ceremony would be the following day. Other celebrity guests in attendance included Britney’s close friend Paris Hilton, as well as Madonna.

Notably, Britney’s family — including dad Jamie, mom Lynn and sister Jamie Lynn — were not in attendance due to fallout over the end of her conservatorship. Because of the previous conservatorship, the wedding is an even bigger deal for Britney, as she made it clear that her conservators would previously not allow her to marry and have more children while under the arrangement, despite her wishes to do so. Britney’s sons Jayden, 15, and Sean, 16, with ex-husband Kevin Federline also did not attend, although a lawyer for K-Fed insisted that they are “happy” for their mom.

While an unlikely friendship, Selena and Britney have several crossover connections. Although just over a decade apart in age, the pair both got their start with Disney. Britney was, of course, on the Mickey Mouse Club in the early 1990s, while Selena landed the starring role on the Disney Channel’s Wizards Of Waverly Place as Alex Russo. Both also hail from the south: Brit was born and raised in Kentwood, Louisiana while Selena hails from Dallas, Texas.

Back in 2014, Selena revealed that Britney, now 40, was the main inspiration for her Stars Dance world tour, particularly the pop star’s transitional “Slave 4 U” era. “I think she’s one of the best that made that transition,” Selena said to MTV at the time, referencing Britney shedding her childhood image and embracing a sexier, more adult one. “That video [“Slave 4 U”] is so hot, it’s incredible, so I love that, and I definitely wanted to do that with my transition, but I don’t think there’s a path you have to follow. I think you just have to figure it out and hope for the best, so if it has a similarity, that’s only a compliment,” she also said at the time.

Met Gala Venue: Where The Event Is Held & All About The Costume Institute

Within weeks of Selena dropping “Come & Get It,” Britney reached out to her via Twitter, which marked the beginning of their friendship. “Wow @SelenaGomez … ‘Come & Get It’ on the #mtvmovieawards was incredible! One of my favorite songs out there right now!” Britney excitedly wrote. “And thank you for all of the kind words about the VMA Slave performance … you’re too sweet! Means a lot to me,” the mom-of-two said.

Selena was taken aback to get any sort of response from the pop icon. “It was actually the second time that she tweeted me … I died the first time,” Selena confessed. “I didn’t believe it at first, but it was really sweet, because even with the inspirations through the outfits and the performances, she’s a huge inspiration when it comes to performing.”

Exclusive: The Best Horror Movies From The 1990s

Video posted to social media shows former Full House star Jodie Sweetin being forcefully shoved to the ground by a Los Angeles Police Department officer on Saturday while the actor was taking part in a protest of the Supreme Court decision overturning Roe v. Wade.

In the footage (see it below), the actor appears to be attempting to lead a group of marchers onto an embankment away from the highway when one of the officers shoves her down the incline and onto the pavement.

The footage depicts an LAPD officer grabbing and pushing Sweetin before the actress falls forward to the ground. A group of fellow protestors quickly rushes to help Sweetin up, while other admonish the line of police officers. The incident appears to occur along a freeway exit that the protestors had blocked. Someone in the crowd yells to the police, “What the f*ck is wrong with you guys?”

Sweetin later released a statement to the press, saying, “I’m extremely proud of the hundreds of people who showed up yesterday to exercise their First Amendment rights and take immediate action to peacefully protest the giant injustices that have been delivered from our Supreme Court. Our activism will continue until our voices are heard and action is taken. This will not deter us, we will continue fighting for our rights. We are not free until ALL of us are free.”

Sweetin reposted the widely seen video on her own Instagram page, adding the comment, “Thank you for posting. Love everyone out there in the streets fighting for what’s right… #WeKeepUsSafe.”

The video was filmed and originally posted by freelance journalist Mike Ade, who wrote, “She was trying to lead a group of peaceful protesters away from the freeway,” Ade said on Instagram, adding, “Jodi is the definition of a real one and fortunately she’s okay! But for others who choose to protest today move with caution and keep your head on swivel. It’s going to be a very long summer.”

The LAPD also released a statement to press, saying, “The LAPD is aware of a video clip of a woman being pushed to the ground by officers not allowing the group to enter on foot and overtake the 101 freeway. The force used will be evaluated against the LAPD’s policy and procedure.” TikToker Ophelia Nichols is making an emotional plea for help.

Over the weekend, Nichols announced the tragic news that her youngest son was killed in a shooting and is asking the public for any assistance to help find the culprits. According to local Alabama outlet WKRN, Nichols’ family confirmed 18-year-old Randon Lee was the victim and law enforcement said the homicide remains under investigation.

“The word is already gotten out and I’m just being overloaded with messages,” Nichols said in a video shared on June 25. “And I need to let everybody know. But I’m doing this video for a reason. Because I need y’all’s help. I never asked y’all for anything, but I need your help with this. There’s almost 7 million people that follow me.  Somebody’s got to know something. Today would have been my baby child’s 19th birthday, but he was [taken] from me last night.”

Per WKRN, Nichols said her son was shot at a gas station in Prichard, Ala., before driving down the street to a different gas station, where he was later found deceased.

Paramount and Skydance’s all-American blockbuster Top Gun: Maverick is still flying high at the box office, crossing the coveted US$1 billion (more than $1.4 billion) milestone over the weekend.

It’s the first movie of the year and only the second in COVID-19 times, following Sony’s Spider-Man: No Way Home with US$1.9 billion ($2.74 billion), to reach that benchmark.

It’s even more impressive that Maverick hit the US$1 billion mark without playing in China or Russia, two major markets.

READ MORE: ‘The secert my husband’s ex-wife told me’

After only 31 days on the big screen, Top Gun: Maverick has become Tom Cruise‘s first movie to surpass US$1 billion at the worldwide box office.

Prior to this weekend, the sequel to the 1986 action flick Top Gun was already the highest-grossing movie of the year at the domestic box office with US$521 million ($751.2 million).

Now in its fifth weekend of release, Maverick added US$30.5 million ($43.9 million) and stands in a close race with newcomer Elvis for the number one spot on domestic box office charts.

With another US$484.7 million ($698.9 million) at the international box office, revenues for Maverick currently stand at a staggering US$1.006 billion ($1.45 billion) worldwide.

Those ticket sales were enough to overtake Disney’s Marvel adventure Doctor Strange in the Multiverse of Madness (US$943 million or $1.36 billion) as the highest-grossing movie of the year at the global box office.

Thanks to critical praise and stellar word-of-mouth, Top Gun: Maverick has been crushing box office records since opening in theatres over US Memorial Day weekend.

According to Paramount, repeat customers and Imax screens have been fueling momentum in the weeks since its theatrical debut.

By its fourth weekend in North American movie theatres, 16 per cent of the audience had returned more than once and 4 per cent had returned three times or more.

Directed by Joseph Kosinski, the US$170 million-budgeted ($245 million) Top Gun: Maverick centres on Cruise’s character, Pete “Maverick” Mitchell as he trains a new group of cocky aviators for a crucial assignment.

For Paramount, the movie extends a stellar 2022 box office streak.

Notably, there’s not a Spandex superhero in the bunch.