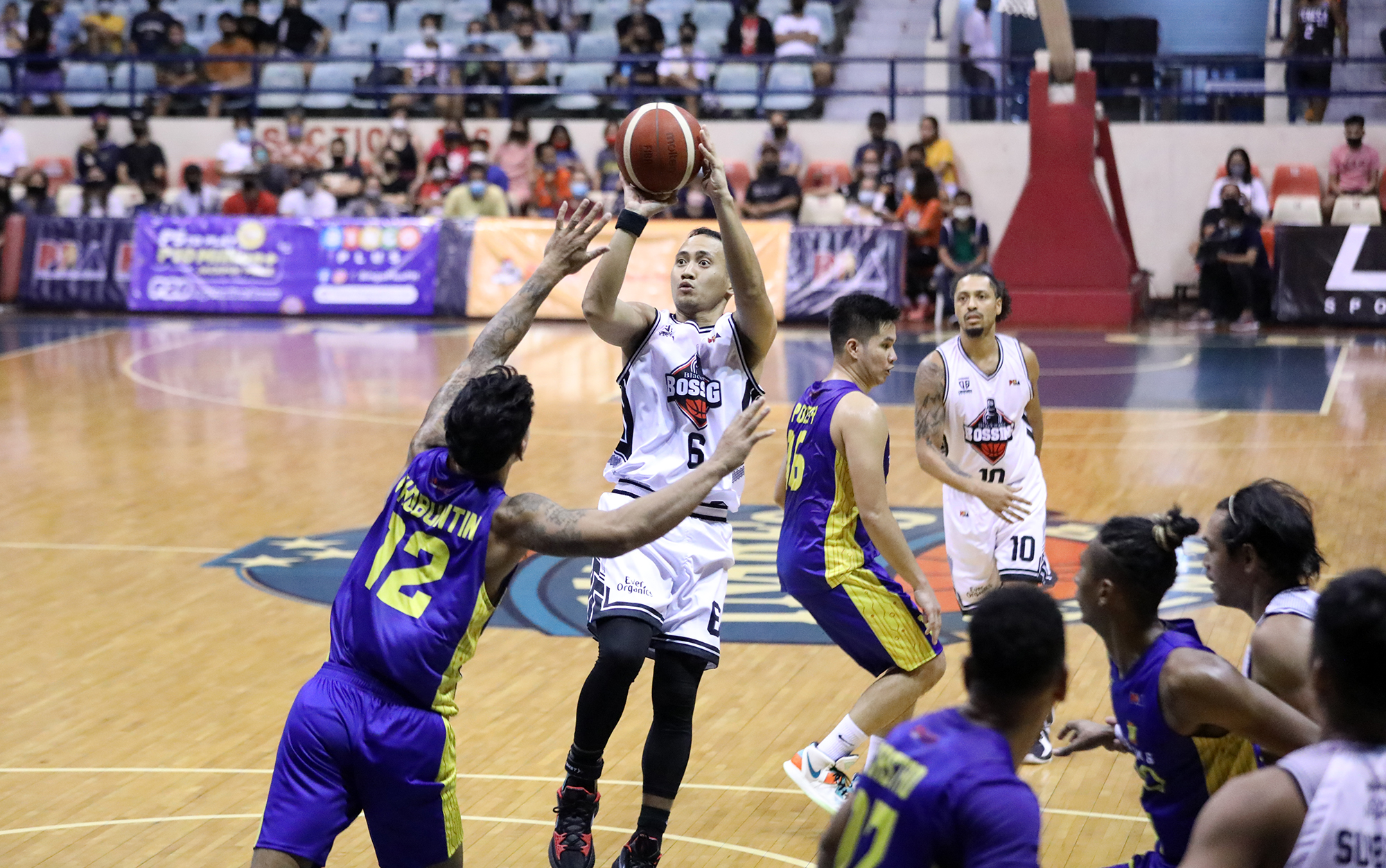 It seems Blackwater is serious about turning its fortunes—and its image—around.

The Bossing turned to veteran skipper JVee Casio in the stretch to stun defending Philippine Cup champion TNT, 85-78, in a cardiac showdown on Friday at Ynares Center in Antipolo City.

JVee Casio scored the Bossing’s last seven points, helping them wiggle out of a 78-all deadlock and then snuffing out the Tropang Giga’s chances at coming back to ultimately claim a victory that should augur well for the franchise.

“We just stuck with what was working. It’s not every day that you beat a champion team. If we play them 10 times, maybe we’d beat them just once,” coach Ariel Vanguardia said after the game.

The Bossing won just one game last season, one that ended an ignominious 29-game slump spread over two years, and then spent the off-season promising changes within the franchise in the hopes of burning its whipping boy label.

And the Bossing could not have picked a better way to start reformatting their image, pouncing on the Tropang Giga that was still without prized guard Mikey Williams.

But Casio immediately put the victory into perspective.

“It’s a good win against a very good team, but this is just one game. We still have many more to go,” said the veteran playmaker, who led all scorers with 22 points spiked with four assists and four rebounds.

Rosser is expected to suit up in Blackwater’s fourth game.

Roger Pogoy finished with 32 points, while only Poy Erram and Jayson Castro reached double figures with 10 each as the reigning conference champions dropped to 1-1. The Tropang Giga were deserted by their three-point shooting, making just 4-for-29 (13.8 percent) from deep.

“It’s huge. Really huge,” Vanguardia said of the victory, which he kept framing as an upset.

Blackwater led the star-studded TNT by as many as 13 points, 64-51, in the third period.

“Of course, we’re a bit lucky. We seem to have played a TNT team short on preparations. Maybe their mindset is still at the [Southeast Asian Games],” Vanguardia said. “It’s really better to have played them this early, than at a time when they’re desperate for wins.”

“I’m sure their play would’ve been totally different,” he added.

But things are about to get a bit tougher for Blackwater, with reigning Governors’ Cup champion Barangay Ginebra coming up on Sunday

“We have another champion team [to play] on Sunday. No rest. This is the PBA. It’s the best of the best,” he said. 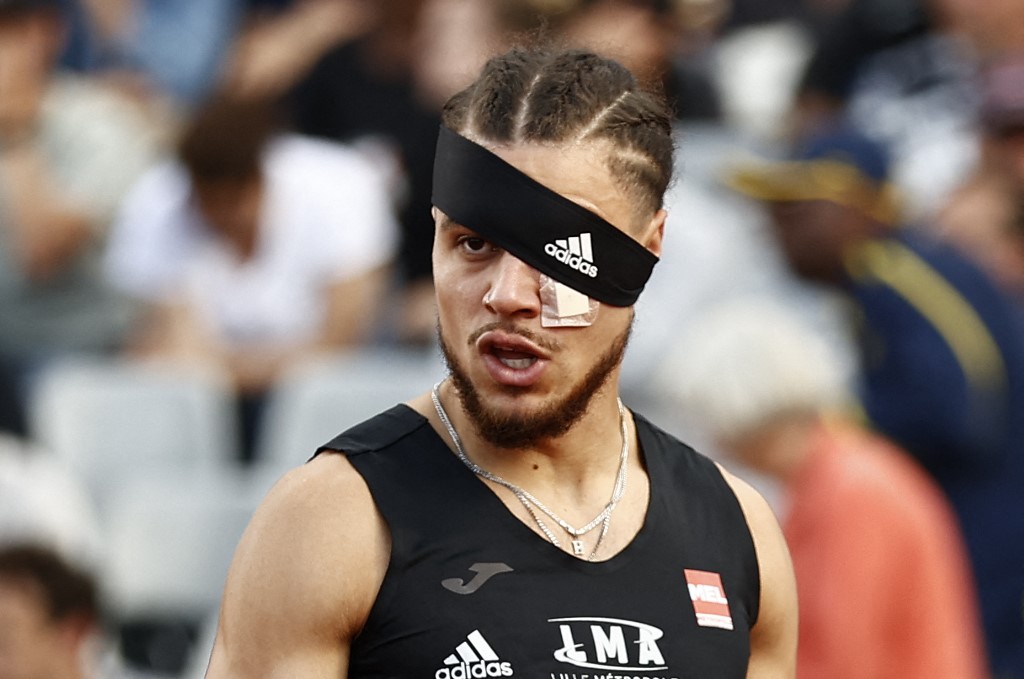 France’s Wilfried Happio wears a bandage after being assaulted at the warm-up stage during in the mens 400 metre hurdles final during the French Elite Athletics Championships at the Helitas stadium in Caen, northern France, on June 25, 2022. (Photo by Sameer Al-DOUMY / AFP)

French hurdler Wilfried Happio won the national title at the weekend despite running with an eyepatch after he was assaulted 20 minutes before his race.

Happio, 23, was warming up for the men’s 400m hurdles final at the national championships in Caen, northern France, on Saturday when he was attacked, taking several punches to the face.

“There was a big incident in the warm-up. Someone jumped on him and hit him,” Happio’s coach Olivier Vallaeys said.

“Some guy came out of nowhere and asked him if he was Wilfried Happio and then jumped on him. I managed to hold him back.

“It was 20 minutes before the race, we were ready to go to the call area.

“We’re shocked. The guy was arrested and Wilfried is fine. But I’m speechless, it was pure aggression, it’s scandalous. These are the methods of a savage.”

After Happio crossed the line in a new personal best time of 48.57sec to book his place in the French team for next month’s world championships in Oregon, blood was streaming from his nose.

“I don’t want to say any more about the (assault),” he said. “The race was more complicated than normal because I only had one eye.”

The French Athletics Federation said a man had been arrested in connection with the attack and an investigation had begun.

Exclusive: Wimbledon open for business, not quite as usual – TalkOfNews.com 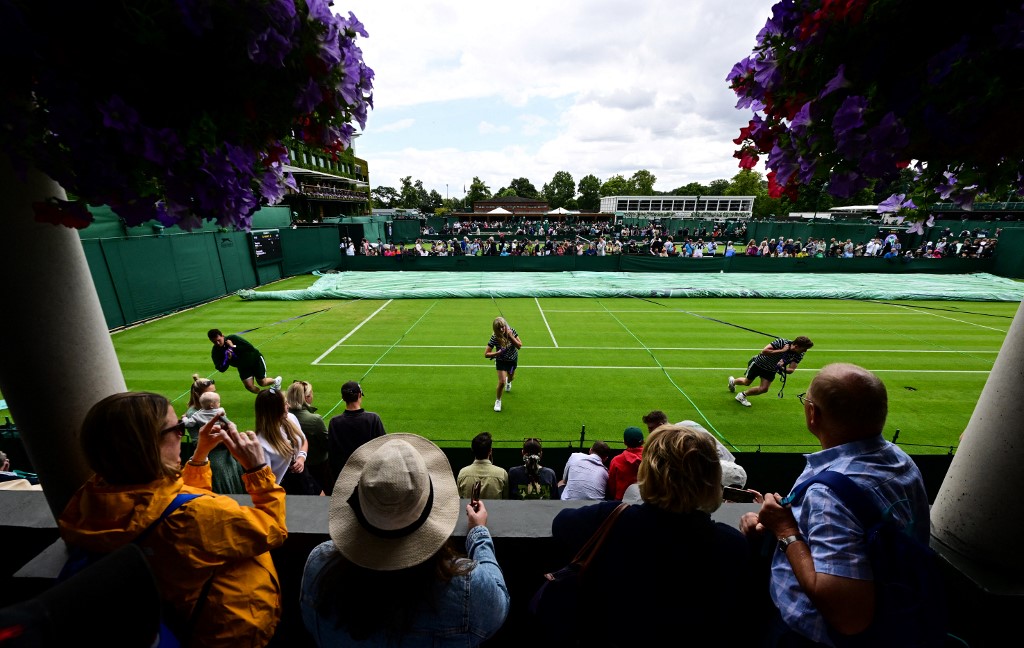 Ground staff members cover the court 4 as the rain started to fall on the first day of the 2022 Wimbledon Championships at The All England Tennis Club in Wimbledon, southwest London, on June 27, 2022. (Photo by SEBASTIEN BOZON / AFP)

LONDON – The world’s most famous queue began streaming into the All England Club on Monday as the gates opened at the start of the 135th edition of the Wimbledon championships.

The quintessential English sight of thousands of tennis fans waiting patiently, often having camped overnight, to gain entry to the grounds has been missing since 2019.

COVID-19 put paid to Wimbledon in 2020 and last year the queue was scrapped on safety grounds as the tournament returned to semi-normality, albeit with restricted attendances and players based in secure hotel bubbles.

Although all that makes Wimbledon such a spectacle has returned, it is not quite business as usual despite the buzz around the grounds as the gates swung open at 0900GMT on a breezy morning in southwest London.

For a start, Roger Federer, the king of the lawns with a record eight men’s singles titles, is absent for the first time since winning the junior event in 1998.

The 40-year-old Swiss is recovering from a knee injury and has not played since losing to Poland’s Hubert Hurkacz in the quarter-finals a year ago.

Also missing is men’s world number one Daniil Medvedev after organizers banned Russian and Belarusian players in response to the invasion of Ukraine while women’s defending champion Ash Barty has retired.

The ban on Russians and Belarusians prompted the ATP and WTA to take away ranking points from Wimbledon this year.

Play is also scheduled for 14 days, rather than the traditional 13, with middle Sunday no longer a rest day, meaning the end of so-called Manic Monday when all the men’s and women’s fourth-round matches used to be played.

While the build-up to Wimbledon has been mired in controversy, there are enough plot lines to suggest the next fortnight could be a classic edition.

Serena Williams returns after a year out, gunning for the 24th Grand Slam singles title that has eluded her since 2017.

Serbia’s Novak Djokovic was due to open play on Centre Court on Monday as he seeks to defend his title, win a 21st Grand Slam crown and close the gap on Rafa Nadal who has a record 22.

Spaniard Nadal is halfway to a calendar-year Grand Slam after winning the Australian and French Opens.

Briton Emma Raducanu’s appearance is being billed as a “homecoming” after her extraordinary U.S. Open title win as a qualifier and the spotlight will be fully focused on the teenager when she faces Belgian Alison Van Uytvanck after Djokovic’s match against Kwon Soon-woo.

With the famous Centre Court celebrating its 100th anniversary this year, the opening day has a very British flavor with twice former champion Andy Murray concluding the action against Australian James Duckworth.

Murray is one of 17 British players in the singles draws — the largest home contingent since 2001.

While the stage is set for a feast of tennis over the next two weeks, a rain shower half an hour after play started put a dampener on the early action.

Some things, it seems, never change.

Chelsea technical and performance advisor Petr Cech has become the next departure as the Blues boardroom reshuffle continued following the takeover headed by Todd Boehly.

Boehly and Clearlake Capital completed a £4.25billion takeover of Chelsea at the end of May, making numerous changes to start their tenure.

Blues chairman Bruce Buck was the first to depart, with director and chief decision-maker Marina Granovskaia also set to leave after 12 years at Stamford Bridge.

Granovskaia will remain available to Boehly, who is acting as interim sporting director and chairman, for the duration of the current transfer window to help with the transitional period.

Cech, who took the boardroom role at Chelsea in 2019 after retiring as a player, reportedly held talks with Boehly this week in the wake of the Buck and Granovskaia exits.

The former goalkeeper has subsequently opted to leave his role, effective on Thursday.

“It has been a huge privilege to perform this role at Chelsea for the past three years. With the club under new ownership, I feel now is the right time for me to step aside,” Cech said.

“I am pleased that the club is now in an excellent position with the new owners, and I am confident of its future success both on and off the pitch.”

Boehly added: “Petr is an important member of the Chelsea family.

“We understand his decision to step away and thank him for his contributions as an advisor and his commitment to the club and to our community. We wish him the best.”